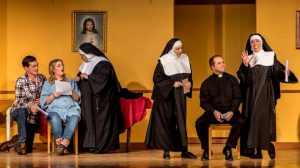 State Street Theater will host auditions for a new production, Drinking Habits 2.  Drinking Habits 2, Caught in the Act, is a delightful play filled with hilarious hijinks and misunderstandings.  The performances will be Friday, April 14, Saturday, April 15, and Sunday, April 16.

Some will recall State Street’s production in 2019   of the first Drinking Habits .  It was a huge hit with audience, cast and crew alike.  Drinking Habits 2 promises the same reaction.

Auditions for the cast of five women and three men will be:

Auditions will take place at 1 N State Street, New Ulm.  Use the back parking lot directly off Center and Washington Streets.  Enter stage door #7.  Director for Drinking Habits 2 will be Wendy Tuttle, 507-766-0049.

If you are not interested in acting in this production, but would like to know options to be a part of the crew or technical help, please contact info@statestreetnewulm.org.

State Street Theater Co. (SSTC) conducts open, easy auditions. Whether you’re an old friend or a newcomer to the theater, all actors are welcome and given equal opportunity for roles in our shows. No parts are precast (unless announced in advance). For each show, we look for performers who are ready to follow directions, learn, and have fun!

Unless specifically requested, actors are not asked to prepare/memorize any audition material in advance. Simply fill out the audition sheet with contact information, brief experience summary (if any), potential scheduling conflicts, and any health concerns/allergies we should be aware of.

We may take your picture for reference, even if you have performed with us before.